Poly-V drives are still used in the market. The poly-V belt - also called V-ribbed belt - is a longitudinally ribbed belt. The compact design enables quiet and low-vibration transmission due to frictional engagement, especially for smaller drives.

For years we have been a reliable partner for the production and procurement of V-ribbed pulleys. Powerful partners also provide high-quality poly-V belts for optimum overall drive.

Pulleys are produced for all common profiles such as PJ, PL, PM in all relevant versions. 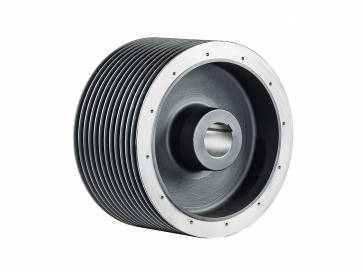 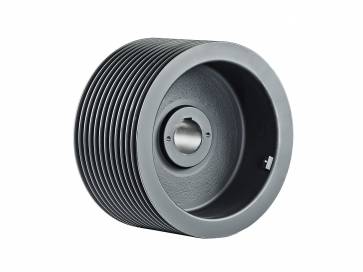 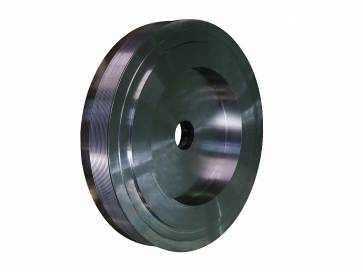 Depending on the requirements and load of the drive, the pulleys are made of standard gray cast iron (EN-GJL-200), nodular cast iron (EN-GJS-400), steel (C45, St52) as well as aluminum (various alloys possible) and plastic.

The production usually takes place according to customer drawings. Of course, individual drive solutions are also offered, which are designed specifically according to the requirements of the customer and the performance data.

The shaft-hub connection can be made as a cylindrical bore, with or without a keyway or as a TaperLock design for a corresponding TaperLock bushing.

For optimal, low-vibration drive, the pulleyss are balanced to the desired quality. For standard pulleys, a balance quality of at least G16 is guaranteed.

The surface is passivated according to customer requirements. Machined functional surfaces are generally protected only by an oil or wax film. Other surfaces can be primed or painted as specified.

In addition to the single-sided poly-V belt, a double-sided belt can also be used. This transmits almost twice the power and can drive through the two-sided profiling pulleys also with the "belt back". This allows the power transmission on both sides of the drive belt and thus the drive of the pulleys in opposite directions.

The belt is suitable for all cases in which double-sided drive power have to be transmitted. Grinders, crushers, agitators and rolling mills as well as textile machines are among the common fields of application.